We’ve just had a new article (pdf) published as part of a Research by design issue at Form Akademisk. What follows is a summary of some of the key points, alongside the embedded videos that form the central arguments in the research. The article is called Depth of field: discursive design research through film written […]

Immaterials: the ghost in the field

This video is about exploring the spatial qualities of RFID, visualised through an RFID probe, long exposure photography and animation. It features Timo Arnall of the Touch project and Jack Schulze of BERG. The problem and opportunity of invisibility RFID is still badly understood as an interactive technology. Many aspects of RFID interaction are fundamentally […]

In the design of the interactive elements of Sniff, Sara had to use visual diagramming as a way of exploring, understanding and prototyping with non-visual feedback such as sound and vibration (haptics). Sara developed a speech bubble approach to annotating physical objects, so that they look like they are ‘saying’ the audio and haptic feedback. […]

By Timo on 18 September 2009 in Projects, Universal design

After two years of development, many awards and publications, we have finally given Sara Johanssons’s Sniff the proper communication it deserves. Sniff is first and foremost a high-quality physical toy dog, that can withstand the rough and tumble of everyday play and activities. But Sniff’s interactive elements add an extra dimension of experience and engagement. […]

By Timo on 17 September 2009 in About the project, Interaction design, Social & cultural research

The broad response to the short film Nearness has been tremendous. In the two days since it was launched it has received over 55,000 views and has been covered all over the internet. It is great when a project is not just just well received, but thoroughly understood and appreciated for the underlying reasons it […]

We recently had the chance to present Touch at the event Kreative Oslo 09 at DogA, the Norwegian Center for Design and Architecture. Kreative Oslo is a broad seminar that gathers the creative fields in Oslo, including art, design, research, commercial actors, cultural institutions etc. Presenting Touch at a event like this is a good […]

Touch researches RFID through a practice-based interaction design approach. We are actively creating concepts, sketches and prototypes, and investigating how they manifest as products. These artefacts are part of an inter-related design and research process that helps us understand the complex layers of technology, design and research.

Immaterials: Ghost in the field 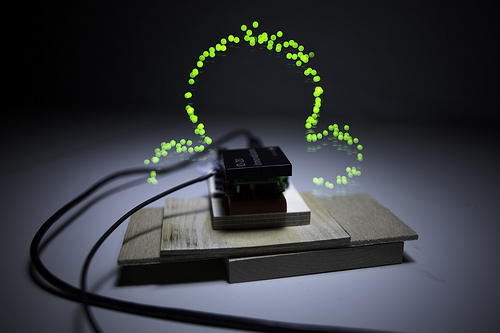 This project explored the spatial qualities of RFID, visualised through an RFID probe, long exposure photography and animation. 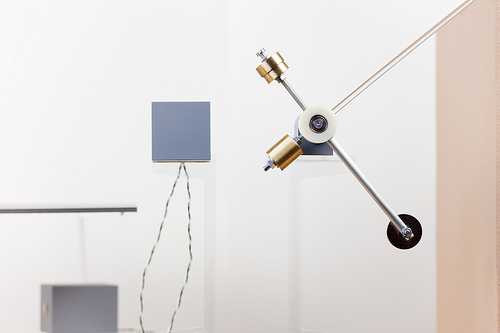 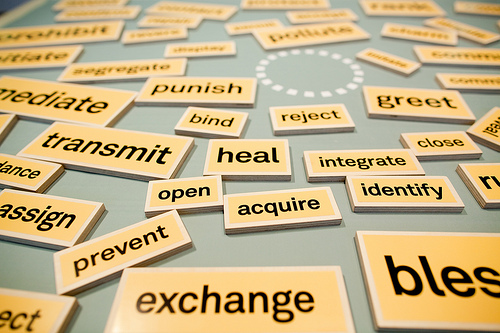 Re/touch brings together hundreds of cross-cultural examples of social norms and values involving touch—all categorised according to actions related to touching. You can browse the quotes to create design briefs, refine interaction scenarios or otherwise inspire you to think, make or do things touch-related. 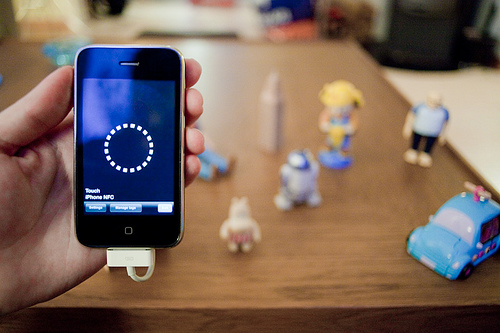 This is a prototype of an iPhone media player that uses physical objects to control media playback. It is based on Radio Frequency Identification (RFID) that triggers various iPhone interactions when in the range of a wireless tag embedded inside a physical object. 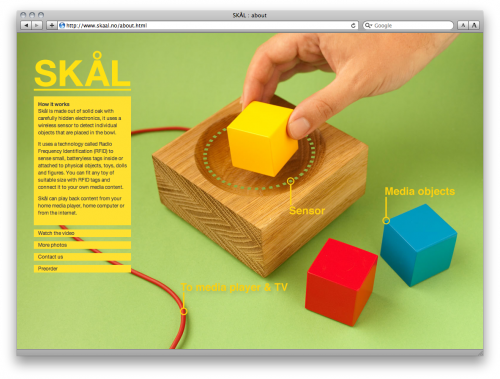 Skål (Norwegian for bowl) is a product that has emerged from our extensive investigations of token-based media for children. It is a media player designed for the home that acts as the interface between physical objects and related digital media on a television. 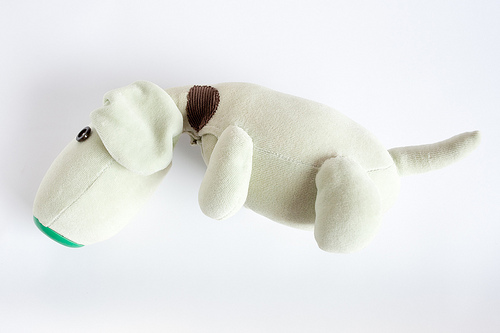 Sniff is a tangible, interactive toy dog. He has a large nose and when he ‘sniffs’ objects that are brought close to him, he gives feedback through sound and vibration feedback. Sniff can react to the world in different ways and with different kinds of behaviours.

For more, have a look at the Projects category on the weblog.

A model of user experience in networked products, presentation at the VERDIKT programme conference, Oslo, 4 November 2009.

Designing from the web to the world, at the Designing Mobile Experiences session at Barcelona Design Week by Timo Arnall, 29 October 2009.

Designing for an internet of things, presentation at the Web of things special event at Picnic ‘09 in Amsterdam, Netherlands by Timo Arnall, 24 September 2009.

Designing for an internet of things, presentation at LIFT ‘09 in Marseille, France by Timo Arnall, 19 June 2009. (Video available)

Interfaces for the local. Presentation by Timo Arnall at Aula Movement. 15 June 2006.

Personal and Social Use of RFID. Presentation to Bartlett AAC students and researchers in the Cityware project. Timo Arnall. 20 March 2006.

A graphic language for Touch based interactions. A poster by Timo Arnall, presented at Design Engaged 2005, Berlin. 13 November 2005.

Demonstrations of Touch scenarios and prototypes. IxD seminar at AHO. Oslo, 24 May 2007.

RFID and the Internet of Things, presentations at Mediamatic workshop, Timo Arnall. 7-9 November 2005.

The Touch weblog nearfield.org is one of the main channels for communicating Touch activities. It receives about 10,000 pageviews a month, with 6,000 unique visitors.

Touch is also active in other forms of social media, including Flickr groups and Vimeo channels.

Interview for NRK Kulturnytt on the future of mobile phones. 12 April 2007.