This week we’re launching the latest in the Immaterials series called Satellite Lamps that explores the spatial, temporal and material qualities of the Global Positioning System (GPS). GPS is a part of the invisible landscape of the networked city. It is literally one of the largest technical systems ever built, and has become a normal part of everyday life, shaping how cities are being used, navigated and experienced. We wanted to explore how GPS takes place in cities, and how it is shaped by the urban environment.

In 2009 the Touch project invented a sensor-based drawing technique to explore the material and spatial qualities of invisible RFID technologies. We further developed sensor-based light painting techniques to reveal RFID interaction, and extended the techniques to explore WiFi. The Immaterials Project, as we’ve come to call it, has been widely exhibited at the MoMA, Lighthouse, and elsewhere, even featured on the Discovery Channel’s Daily Planet and copied by the BBC and the advertising agency BBDO.

We initially tried to replicate our light painting techniques to create ‘heat maps’ of GPS signal strength across the ground, creating a huge ‘combine harvester for GPS’. We found, however, that GPS accuracy shifts significantly across time, and this made our spatial mappings very hard to read. So we instead created a single point of light, a lamp that contains a GPS receiver and changes brightness according to GPS accuracy, and filmed it using timelapse techniques. This film documents our explorations with the Satellite Lamps:

The film illustrates how:

“GPS is not a seamless blanket of efficient positioning technology; it is a negotiation between radio waves, earth-orbit geometry and the urban environment. GPS is a truly impressive technology, but it also has inherent seams and edges.” 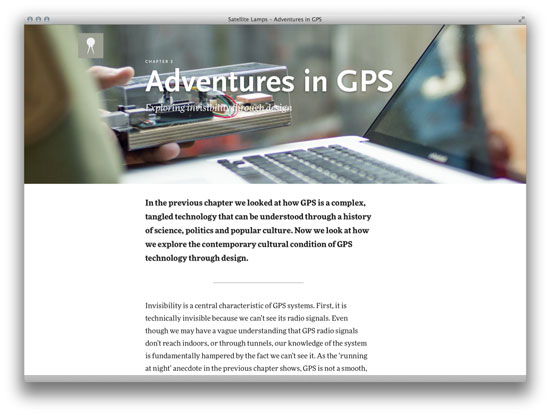 Satellite Lamps is a hybrid piece of research, the film evocatively communicates about GPS in a way that can be seen by many people, while the article we’ve written at Kairos extensively documents our experimental design process, our explorations and findings, as well as framing the project through a popular cultural history of GPS.

With Satellite Lamps we illustrate how interaction design has the technical and communicative means to engage with these complex phenomena. This kind of discursive design makes visible as both celebration and critique, drawing attention to the spectacle of otherwise invisible structures, and opening them up for reflection.

Satellite Lamps is created by Einar Sneve Martinussen, Jørn Knutsen and Timo Arnall. The project joins together the research projects Touch and YOUrban, and the PhDs of Einar (forthcoming), Jørn (forthcoming) and Timo (published 2014). Thanks to Andrew Morrison and Jack Schulze (BERG). Music by Espen Sommer Eide / Phonophani.

This project is no longer active, it finished in 2010. This site is an archive.